“Klassik für Kinder” or “Klassik und Kinder” ... The Publisher’s Funniest Book on the Subject of Johann Sebastian Bach. However, Bach Lovers: This Treat Is in German, Only!

Please, check here, what the prices are in your country ... with my currency converter. Thanks. 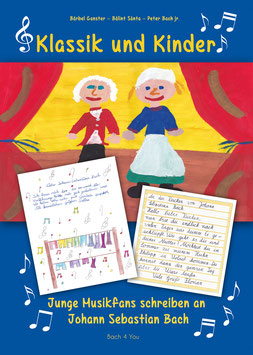 Klassik und Kinder: Elementary School Children’s Letters to Johann Sebastian Bach, the Duke of Weimar and the King of Prussia – A Cute Book for Adults in GERMAN

Look Into the Book 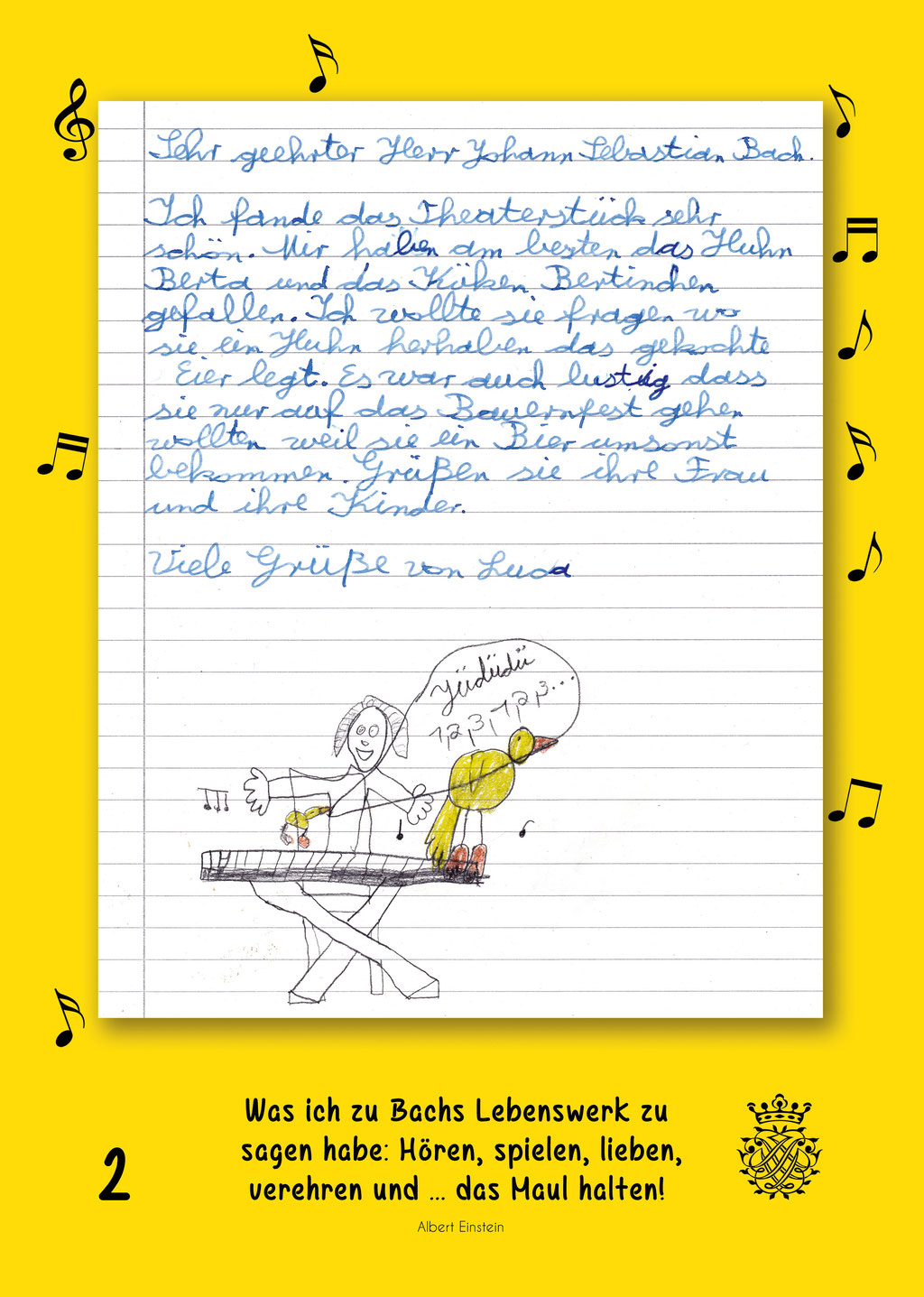 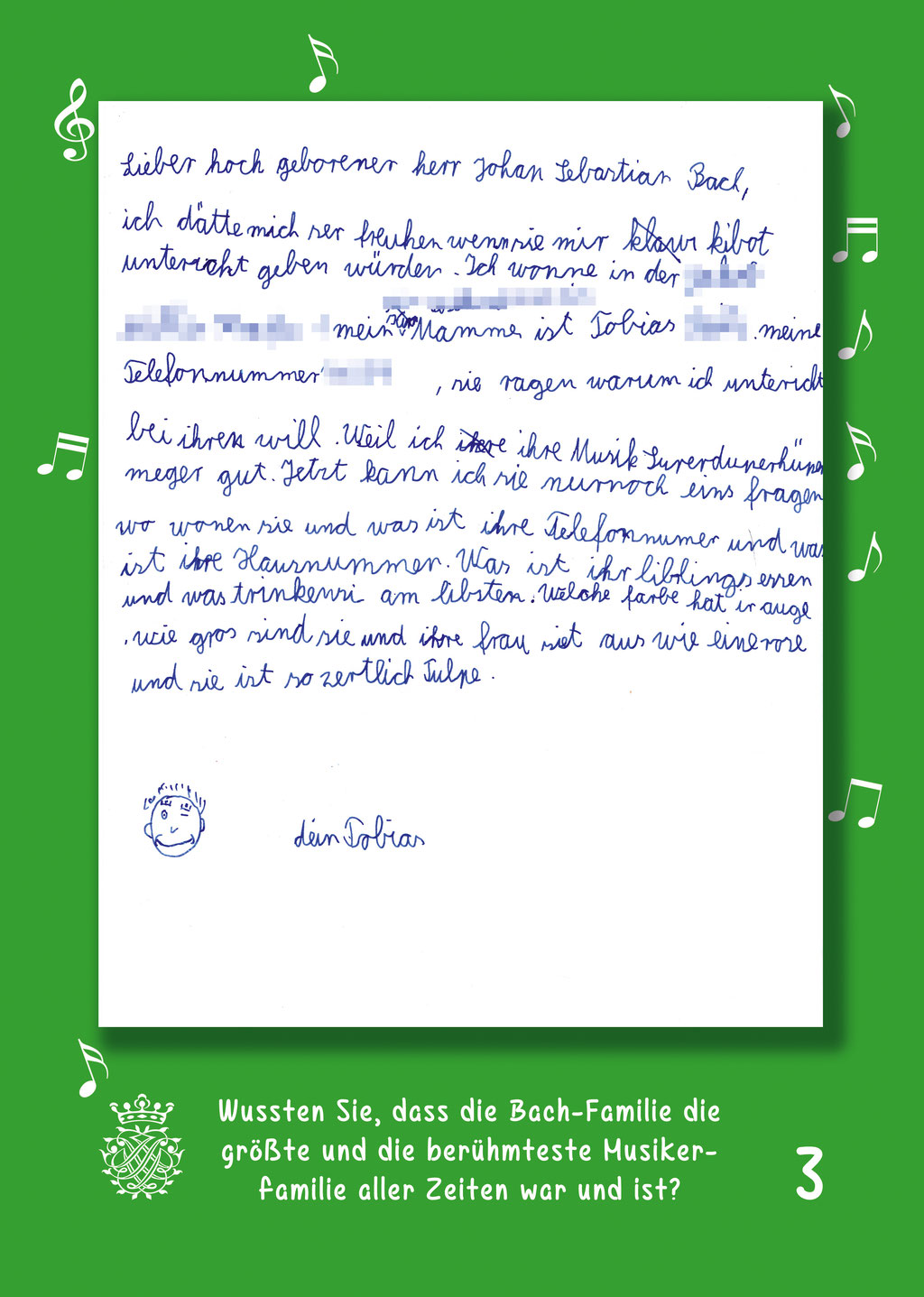 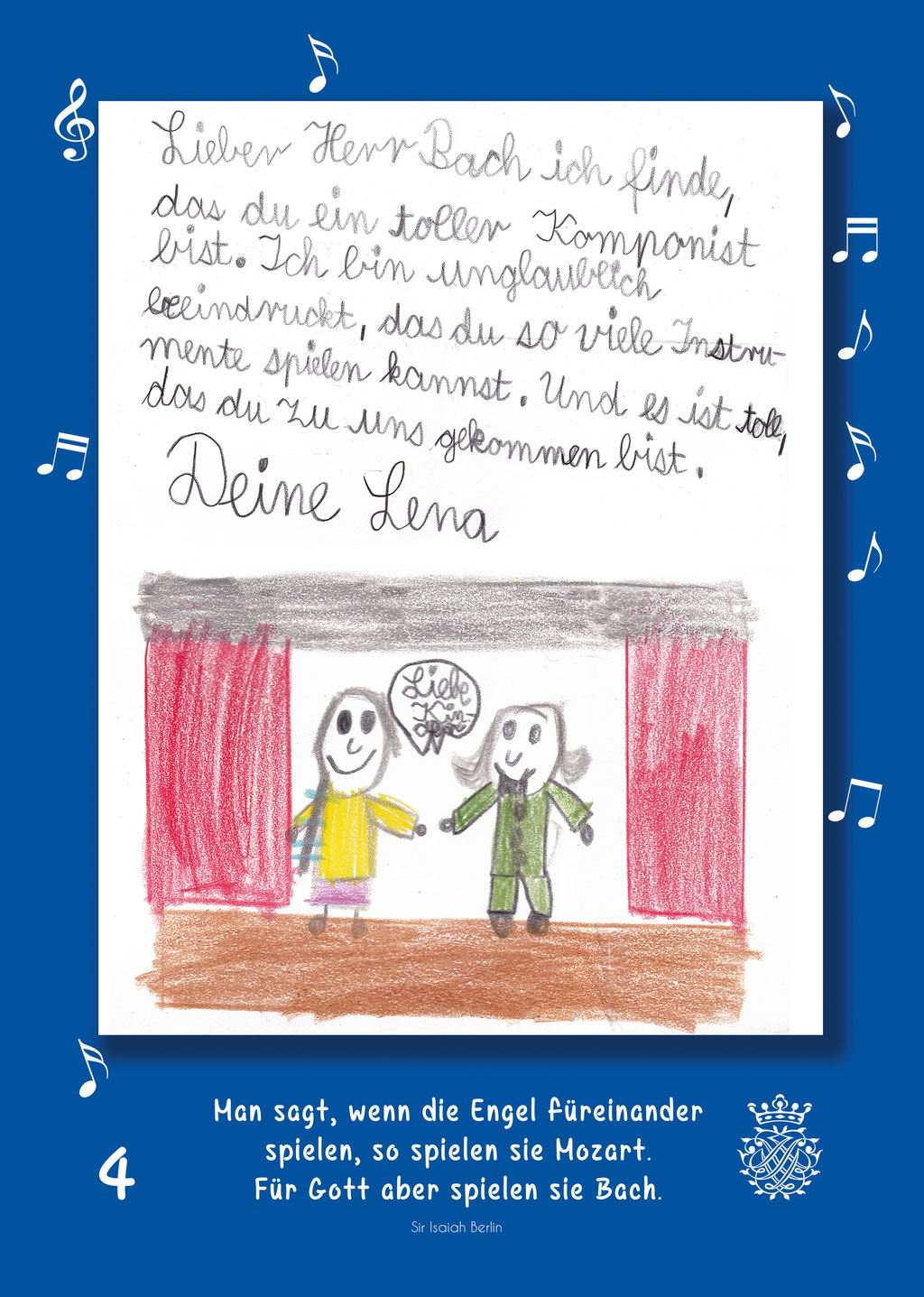 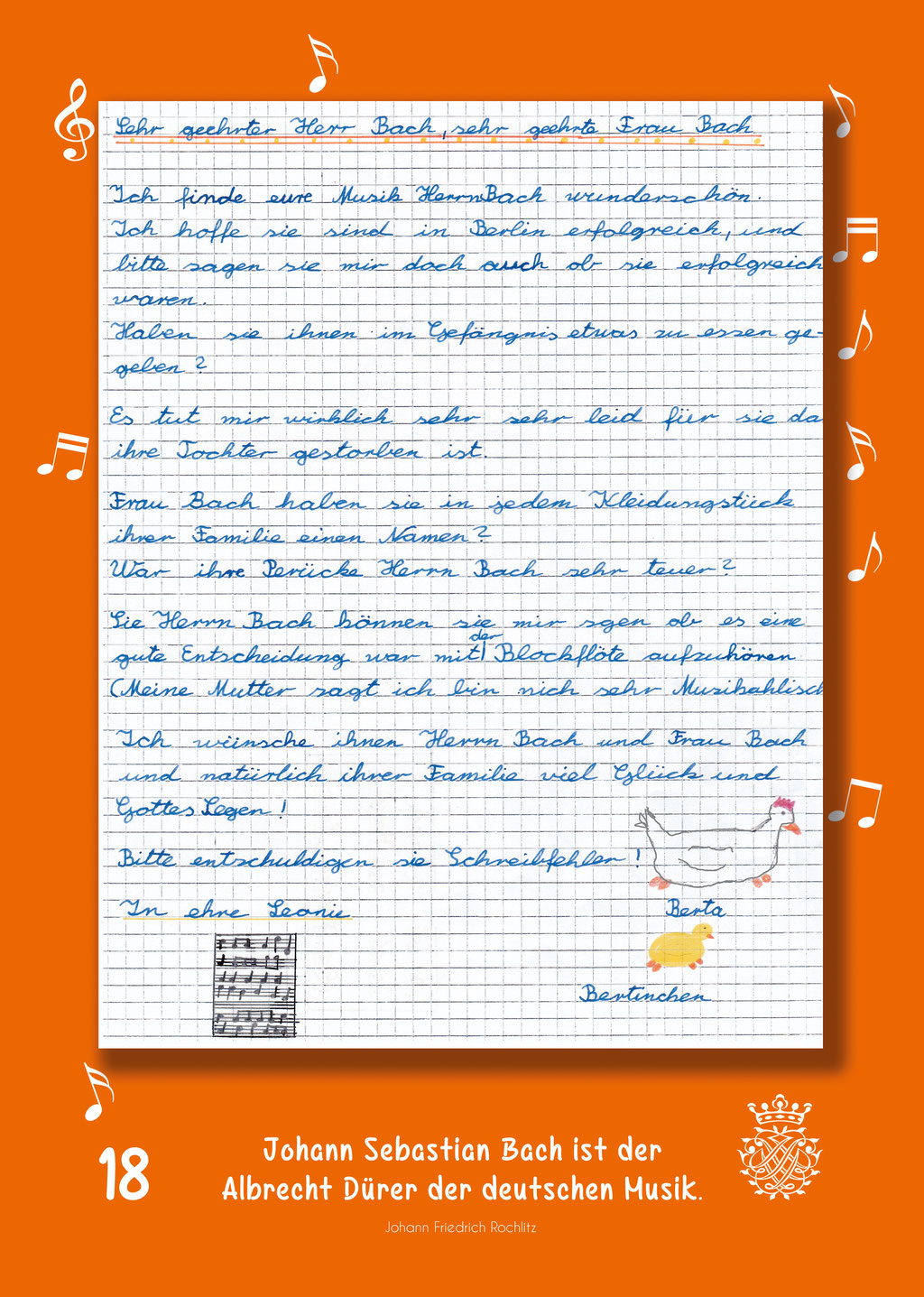 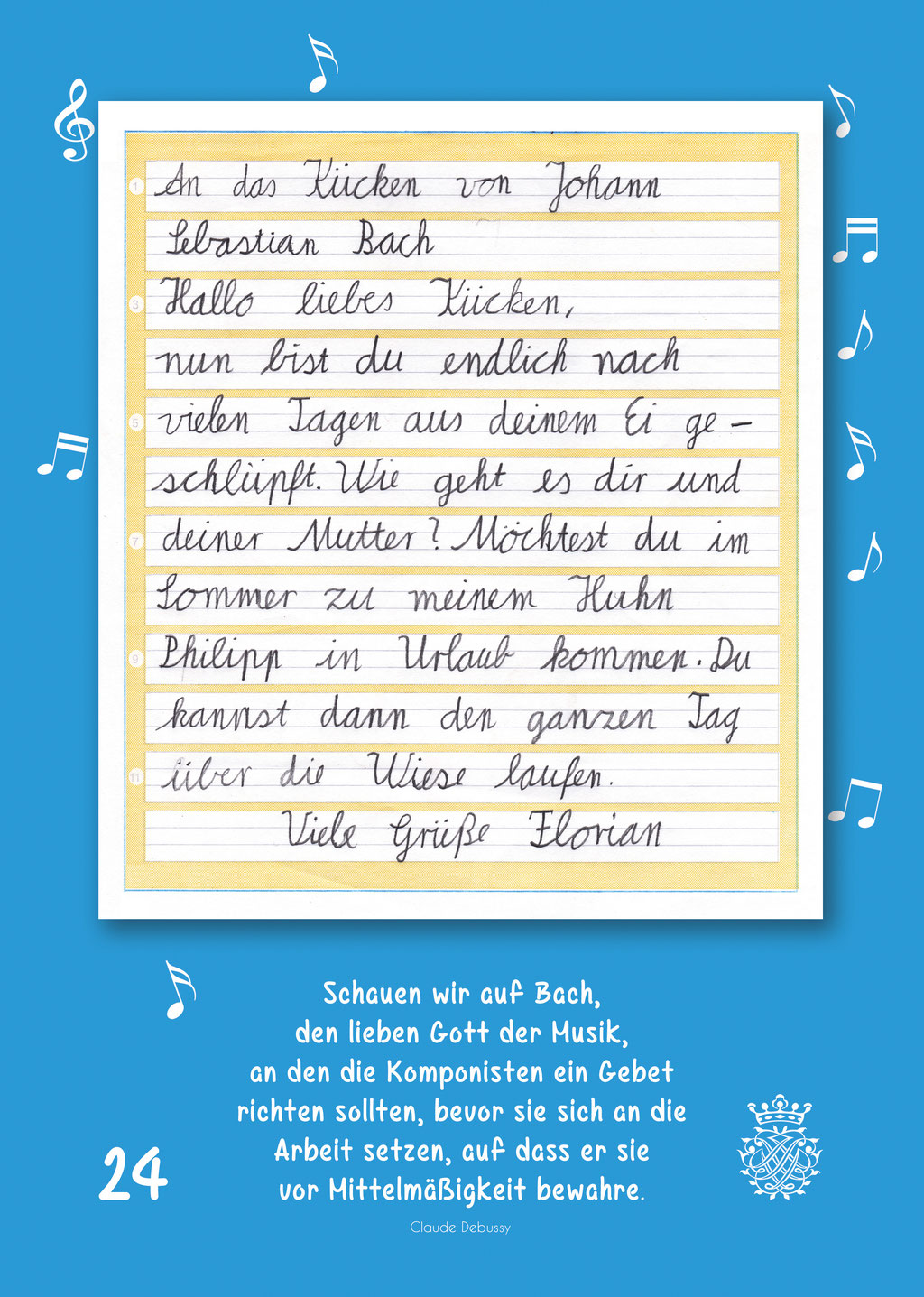 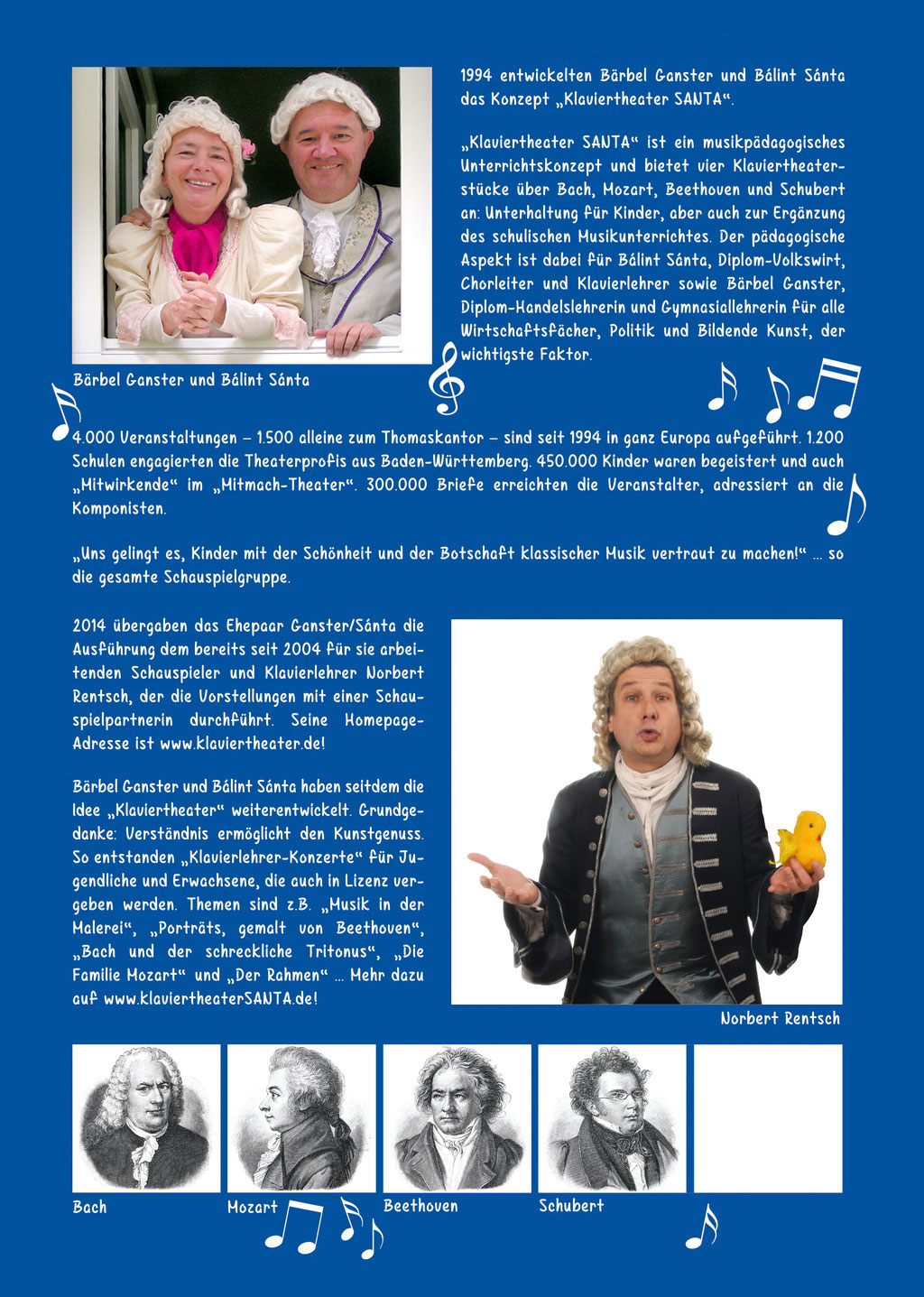 "Klassik für Kinder" or "Klassik und Kinder" ... The Story Behind

"Klassik für Kinder", "Klassik und Kinder", "Kinder und Klassik" ... quite seriously ... these were the three options for a book title, namely the latest work on the subject of Johann Sebastian Bach published by "Bach 4 You". Actually, it seemed clear: "Classical Music for Children" (Klassik für Kinder) seemed to be the perfect title, and for a long time we agreed on it. We, that is in this case the author – my husband Peter – and I as well as the team Bärbel Ganster and Balint Santa and Norbert Rentsch.

The three so far unknowns in the squad above are a tiny ensemble of actors and musicians who perform, or rather performed, plays on four famous composers. And this not only in Germany, but also throughout Europe. Bärbel Ganster and Balint Santa did it for two decades, Norbert Rentsch does it today with his partner: They offer – and in a perfect performance – a great entertainment as "classical music for children".  My husband was so taken by the enthusiasm of the children that he puts the team that calls itself Children's Theater "Klaviertheater Santa" on a special page of his Bach portal "Bach on Bach" (... in German only) in the spotlight for those interested.

The Ganster/Santa theater team received more than 400,000 letters from children in 20 years of thousands of performances at hundreds of schools.

The "Klassik für Kinder" offer from "Klaviertheater Santa" inspires around 100 children so sustainably that 90 minutes does not allow boredom or excessive demands to arise for a moment. Rarely has my husband, and later I, experienced so much fun with so many children. He, my husband thinks, is the perfect way to introduce children to classical music. This way, the children's first contact with classical music is perfect, lasting, exciting, fun.

After the preparation of each actual event, where the children experience classical music on the same level – there is no stage, and they are allowed to participate – the actual performance is a noisy, interested, colorful and educational interaction. In a follow-up – all dates are accompanied by the artists on site – in the school where both actors are guest performers – and no child has to be chauffeured by bus to the place of the "Klassik für Kinder". The argument: no transportation – no danger – no accidents.

Here you can get to the mentioned page on "Bach über Bach", but only in German. There my husband is enthusiastic more than in detail about this musical super offer.

In the follow-up, the participating children are asked to write a letter to Johann Sebastian Bach, to the Duke of Weimar, Wilhelm Ernst and to the Prussian King and to round it off with a painting or a drawing. A cool result and an experience for the teachers, the theater troupe and now also for Johann Sebastian Bach fans, all over the German-speaking region, to see what these elementary school children have to say on the subject of "Children and Classical Music". And that with all spelling mistakes and mix-ups, questions and compliments.

Of course, that's Johann Sebastian Bach on the right. At home, he wears his hair loose, only on the road you see him with a wig.

About the title and the initial pun in the headline and first paragraph. "Classic for Children" (Klassik für Kinder) ... sure, what else, should be the title of the book?!  Until the time when the letters were selected, the quotes collected and the exciting references compiled. "Classical music for Children" ... and I researched whether another music fan had already come up with this grandiose term. "Classical music for Children". And there you go, dozens have come up in the meantime. A whole book column is called in such a way with Amazon. And of course there are music offers with the title "Classical Music for Children". And what do you do if you want to print a complete edition of a book with this title: You research even better and get the feeling: There is a dispute looming. Which you might lose and then "can" dispose your books. Of course, no one wants that and so the creative team – that is, my husband and I – sat down together and researched other options. And what comes out of it and is close enough to "Classic for Children"? Correct: "Classical music and Children" or just ... "Children and Classical Music". And because "Klassik und Kinder" sounds almost exactly like "Klassik für Kinder", that's why this title "won the race".

Around 60 cute letters were sent by elementary school students to Johann Sebastian Bach, the Duke of Weimar and the King of Prussia. What a delightful musical gift for friends, acquaintances, the piano teacher or the organist. If only they speak enough German.

For all of our German-speaking readers, of course, there is still a small service on the subject of "Classical Music for Children" and there is first of all an article of the weekly newspaper "Die Zeit". AMAZON recommends an audio offering, namely "... Classical Music for Children ... Selected Works for Little Listeners" ... however ... without mentioning Bach on the cover ... actually that does not work at all! "Jumboverlag" proposes a whole selection of classical music for children. Another exciting offer is the one of the BAYERISCHEN RUNDFUNKS BR with the title "Klassik für Kinder - Hörspiele über viele Musiker und Komponisten". Finally, on the website "Kinder.de", a family portal, there is the page "Classical Music for Children" and on it parents, grandparents, teachers can find cool hints on the topic.

Are there more exciting offers? Of course there are, and in fact many, many more ... in five publisher's stores. One click here will take you there.