The Biography about Johann Sebastian Bach for Children 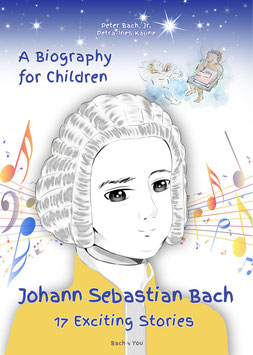 Johann Sebastian Bach – A Biography for Children as a Paper Book

A cool biography about the composer Johann Sebastian Bach. Lovingly illustrated with watercolor art works and pictures. Read the content under "Look inside".

This book is also available as an ebook and as an audiobook in three versions.

It's almost a trip back in time when Balthazar tells his very best friend Veit, both little Baroque cherubs, about the life of the greatest musician on earth and of all time. And this composer Johann Sebastian Bach had not only had twenty children, was the greatest sound poet in the world's largest family of musicians and even played for two Kings, but he has also experienced many an adventure in his life. Veit had never dreamed of such an exciting story about a musician who lived three hundred years ago.

172 pages of text in a wonderfully light writing style are illustrated with watercolors by Veit, Balthazar and Johann Sebastian. A few photos of cities and places where the composer lived, worked or played, provide a brief orientation on what it looks like today, what Bach's home and places of activity were 300 years ago.