Bach T-shirt, Beethoven T-shirt, Mozart T-shirt. Aha. But, what about Schubert, the two Straussens, Verdi, Liszt and Co.? There are no T-shirts with portraits of those composers? Yes, yes ... there are. Don't worry. These gentlemen composers are also heavily represented on these most worn pieces of clothing. And yes, there are also Schubert T-shirts, Tchaikovsky T-shirts and Puccini T-shirts. At "Bach 4 You". In the various "Bach 4 You" shops on the Internet.

Music T-shirts and Bach T-shirts are available in all four online stores. Only not in the publishing house store at the company headquarters. One click will get you there.

You know how normal retail stores used to work and still work today. Really? Then you're at an age when people used to bring milk back home in a jug they already brought with them. So ... actually the milk that was left.  Relatively at the end of the 20th century supermarkets appeared. Of course, like so much else, they were invented in America. Today the small retail shops, of which there are fewer and fewer, are called "Mom and Pop's shops". "Paying later" was  a service back then, a relic of a bygone era.

In the meantime, the Internet is also gaining ground worldwide in this area. Companies - large as well as small, huge as well as tiny - are saving on sales space and personnel and people are making electronic purchases. In the past decade mainly from a PC at home. Today more and more mobile. On the way to work (... in a train and a bus, not behind the wheel), in the break, in leisure time, even when you are not at home for more reasons. One click, next is wait for the postman, FedEx or UPs, next is pleasure. With most articles it is possible in such a way.

A tiny marginal area - and yet huge in itself - could only come together in the time of the Internet. Creative folks, providers of gifts and interested parties. And this is how it works. Designers, artists and "just" creative people not only like to paint, draw and portray, they also wish to publish their works afterwards. And where does a work fit better than on a piece of clothing, a gift, a two square feet of fabric to make a statement? On a T-shirt.

These three "players" meet on the above mentioned portals. Only you as an interested person and "Bach 4 You" as a shop would never lead to a result, because it needs thousands, better millions of designs on T-shirts, so that out of the 7.4 billion people exactly the right ones would meet ... and a deal comes out. And with these gift portals millions of people actually come by every month and create exactly the result they were looking for with their "keywords".

There you order your T-shirt. Zazzle, Redbubble and Spreadshirt, produce it and send it to you. If that's not "Industry 4.0" ... then what?! Order quantity 1 piece ... and you get that at a reasonable price and in a top quality.

Bach T-Shirts, Mozart T-Shirts, Beethoven T-Shirts ... from Super Cool to Real Traditional: My "Adventure Playground" in the Matter of Music T-Shirts for You 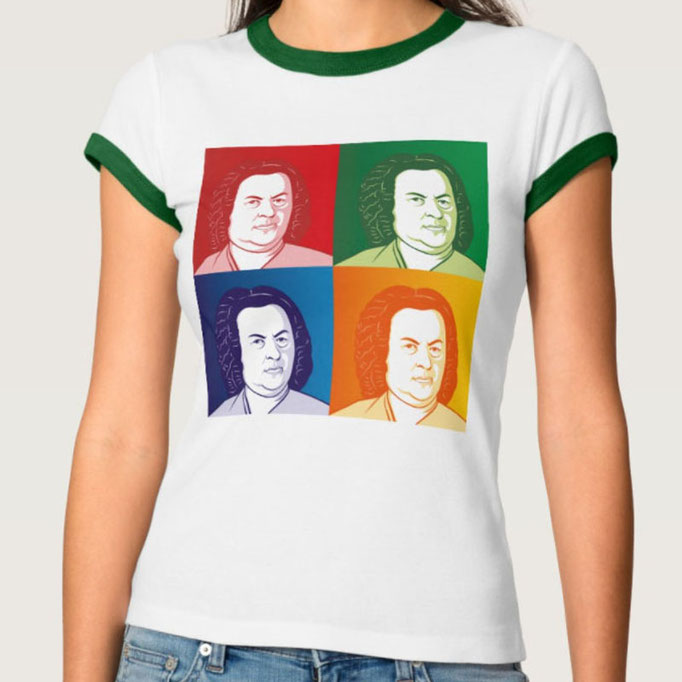 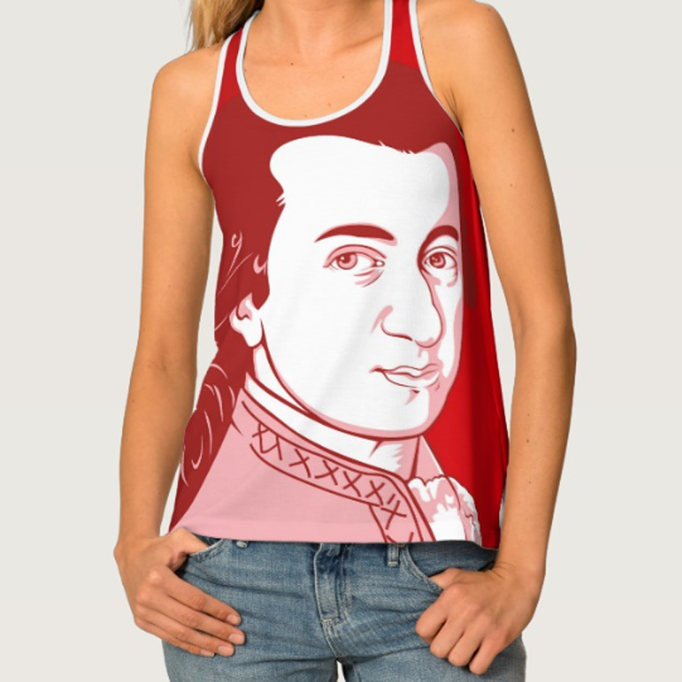 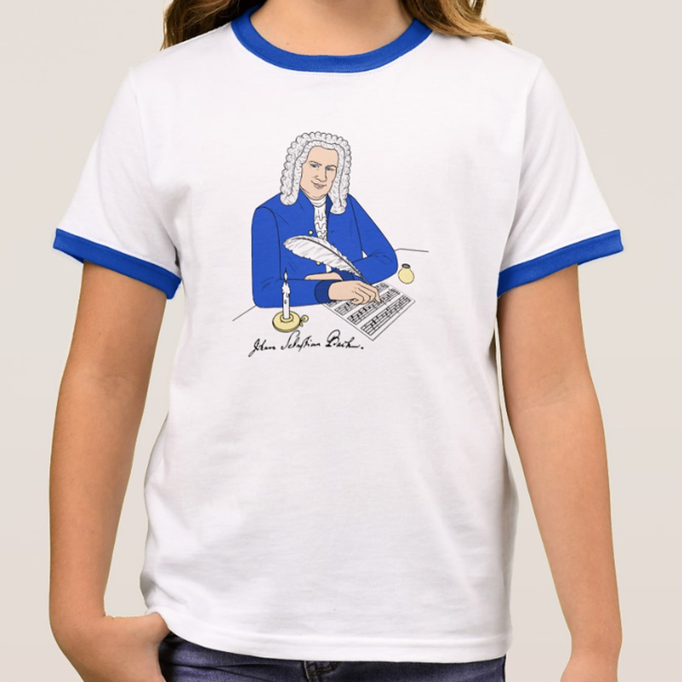 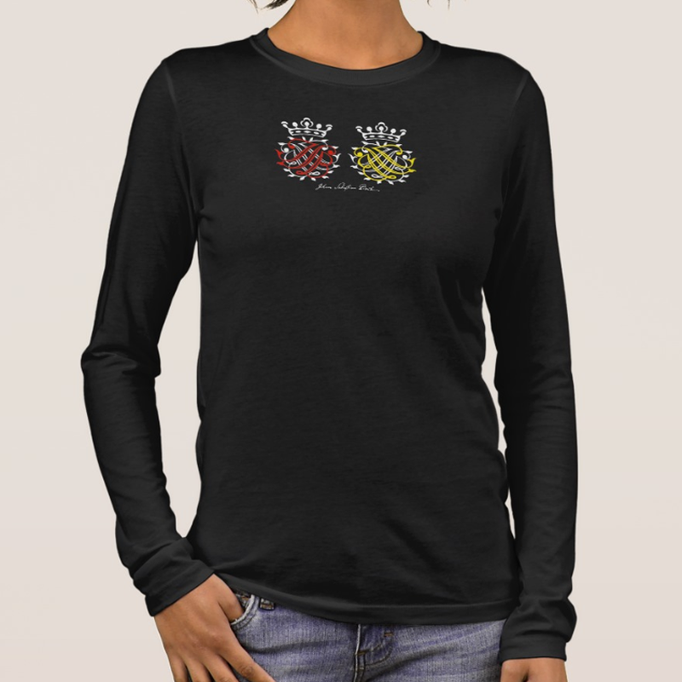 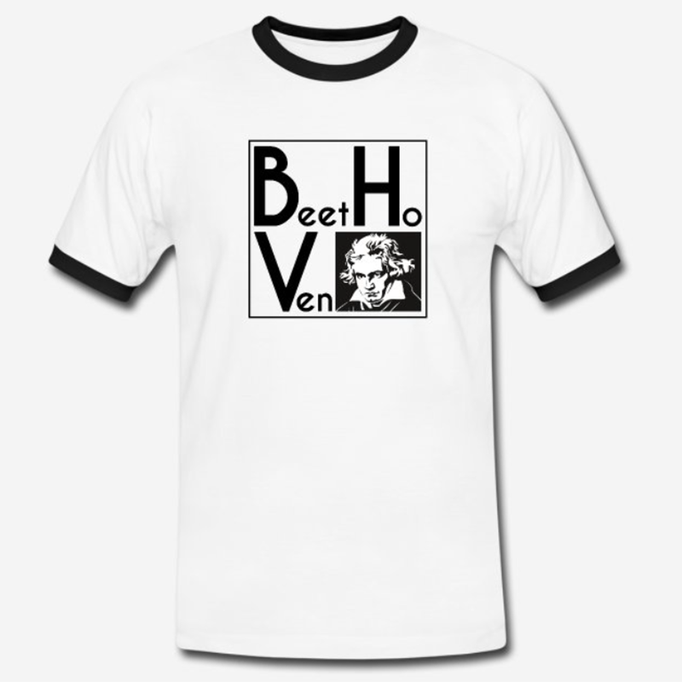 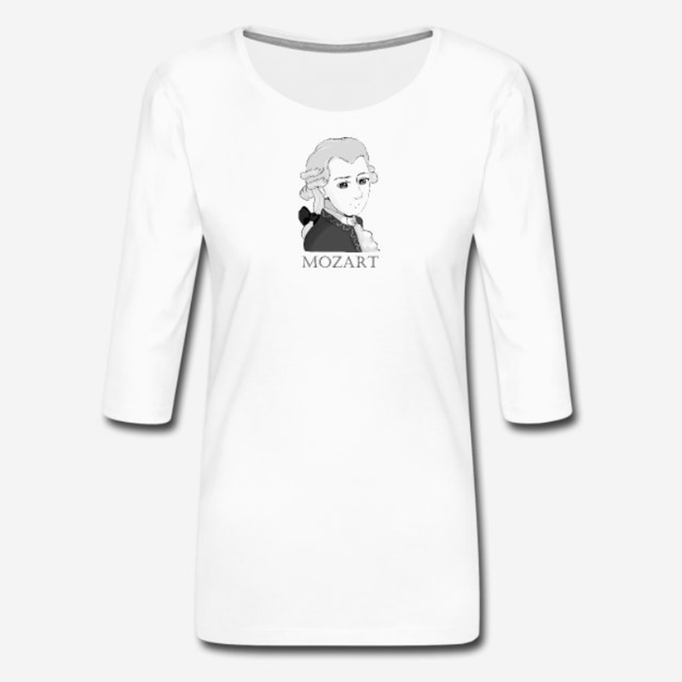 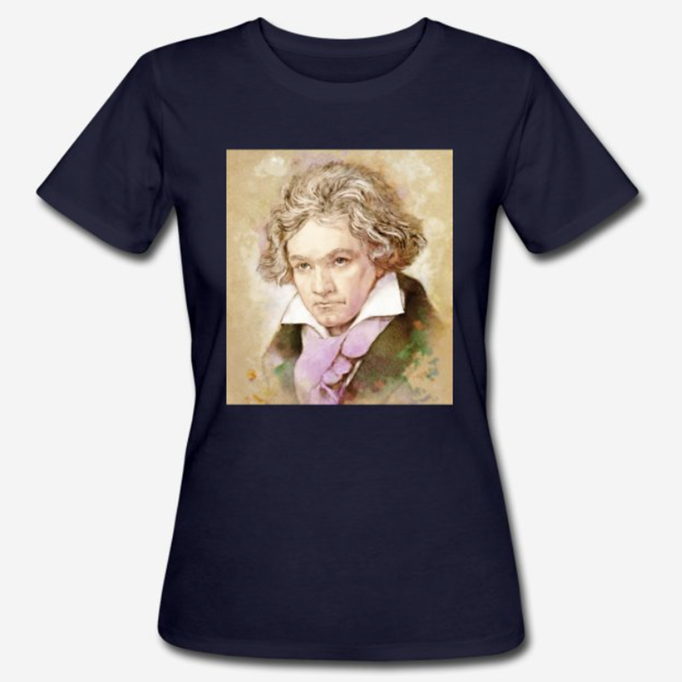 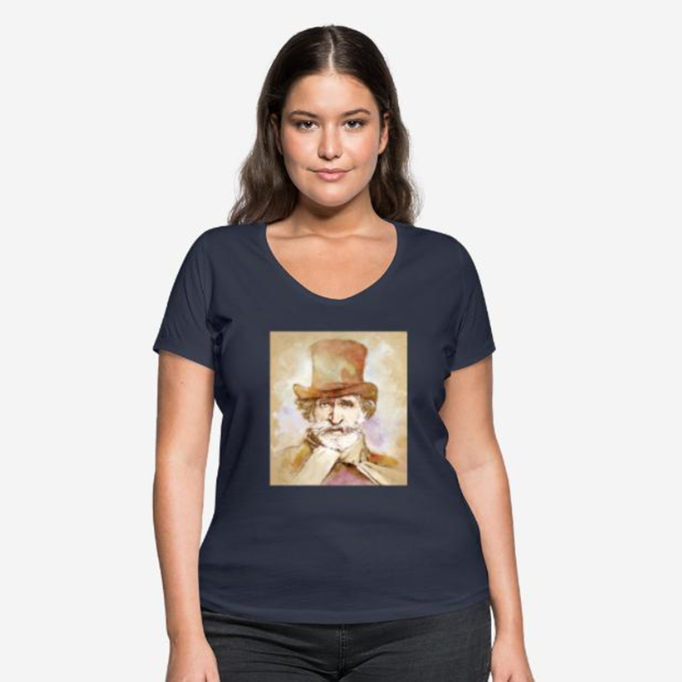 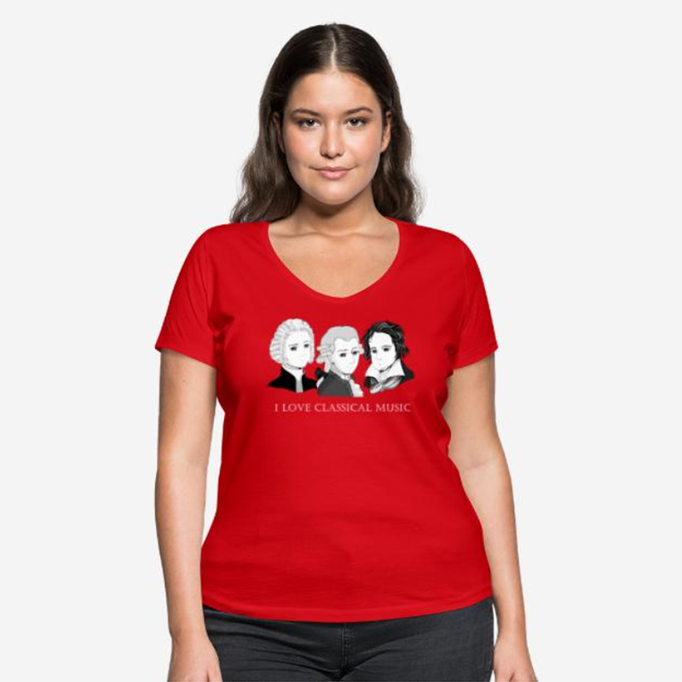 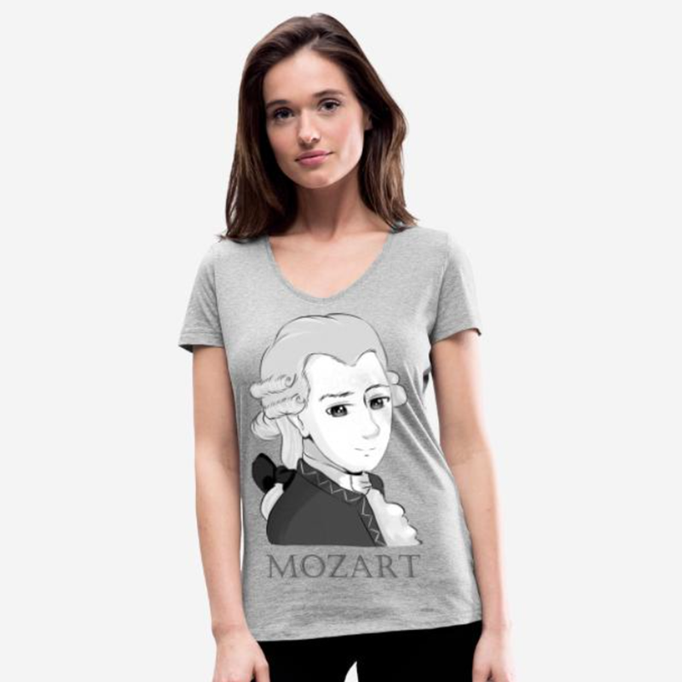 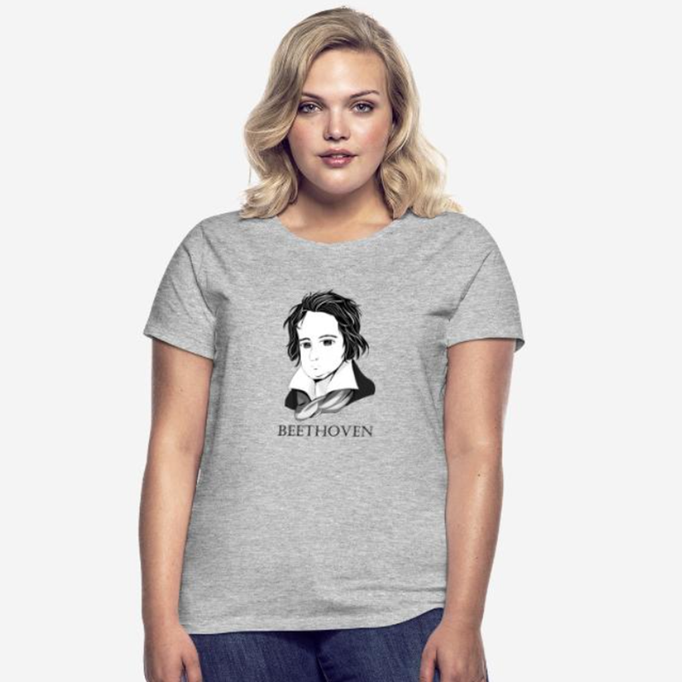 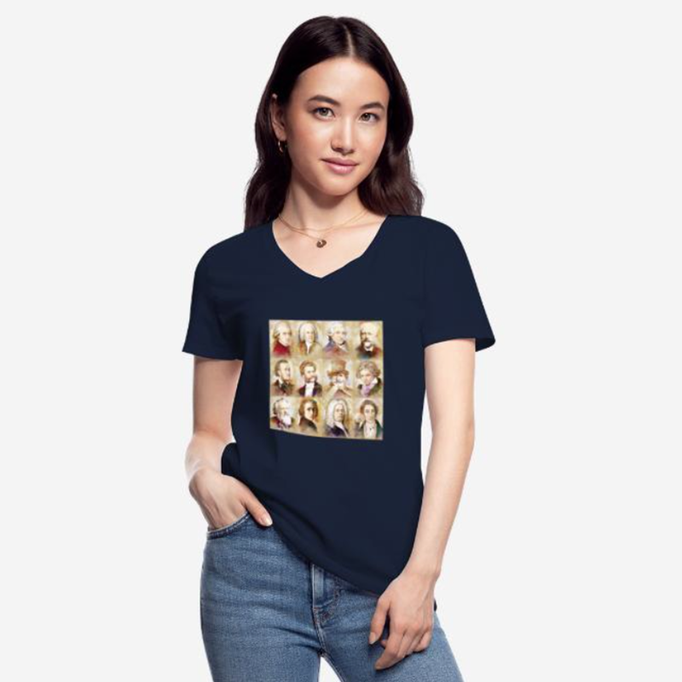 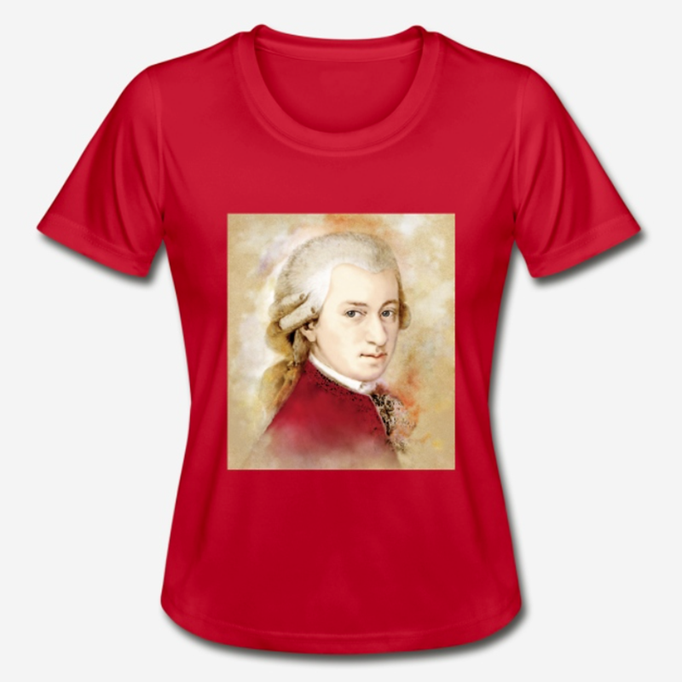 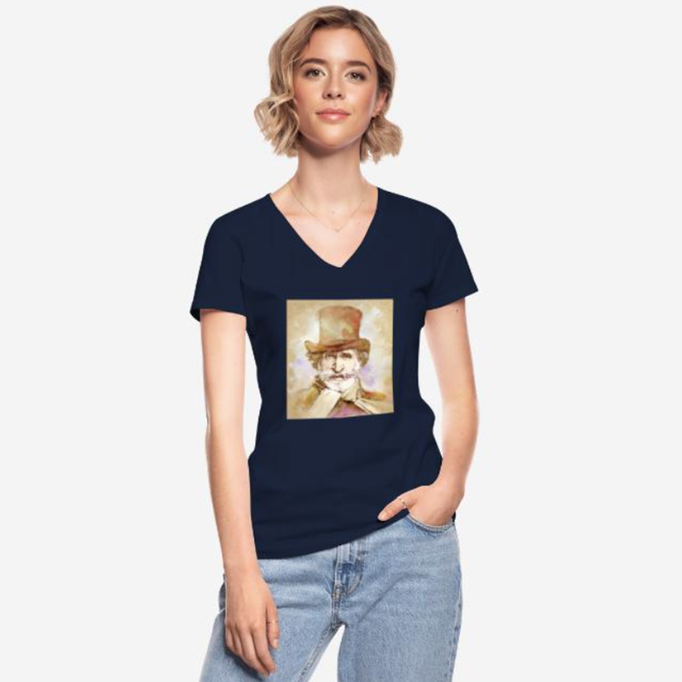 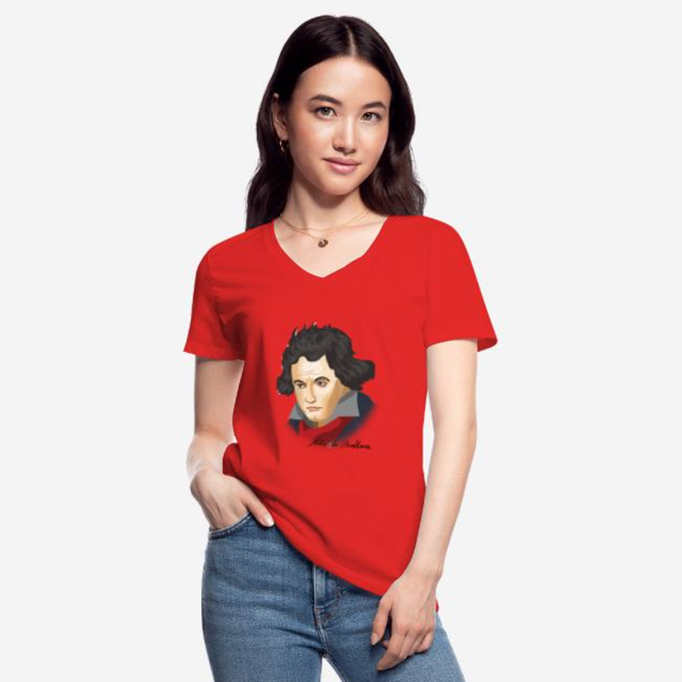 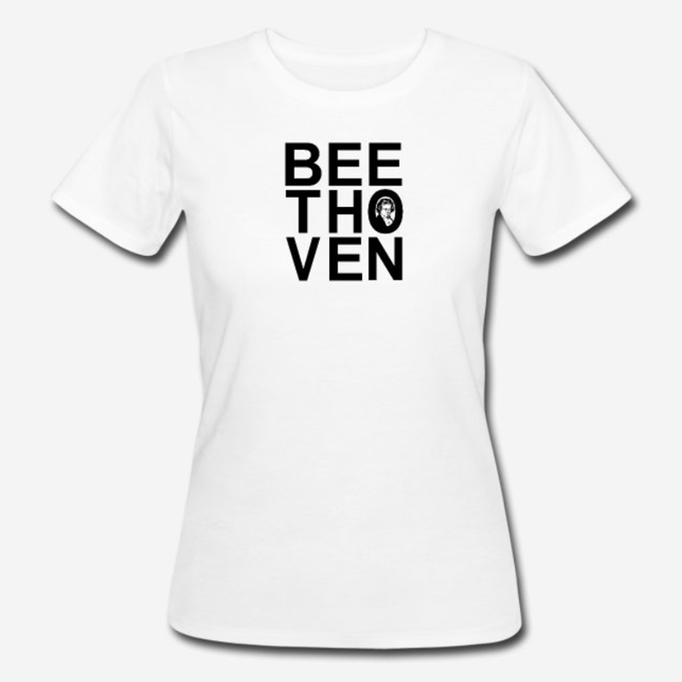 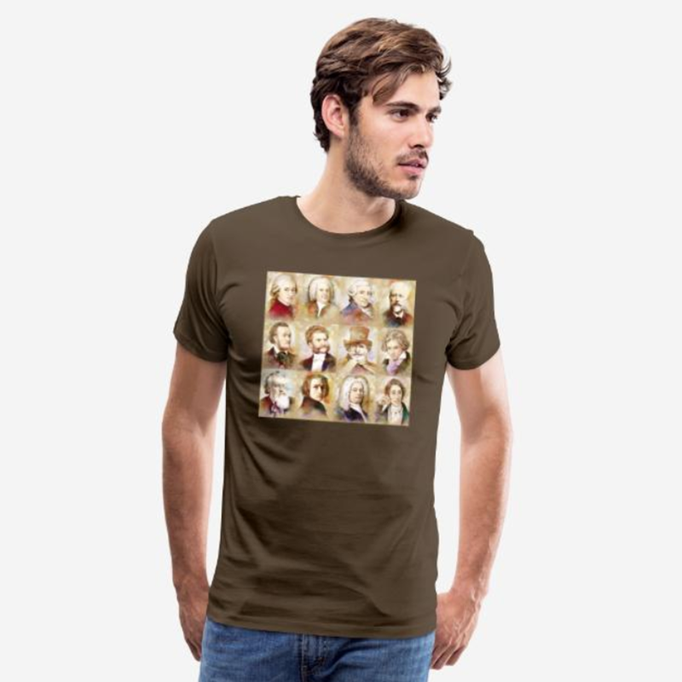 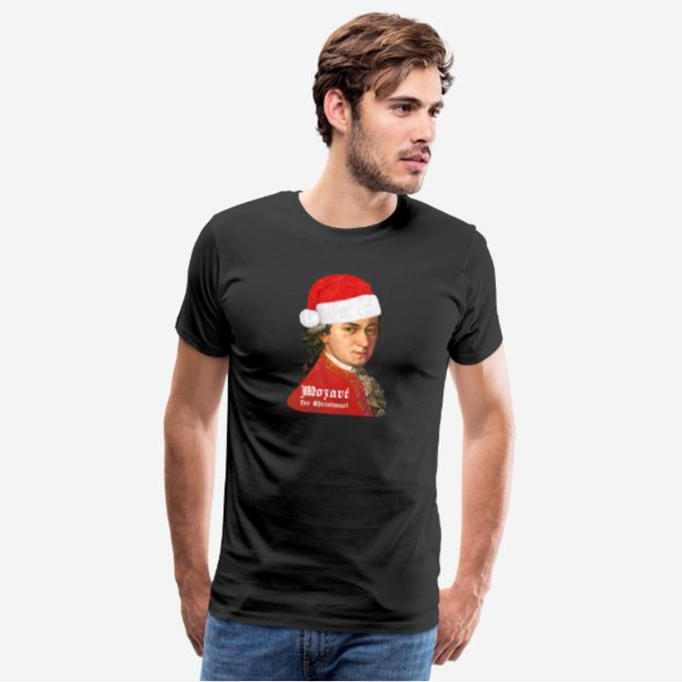 The t-shirts that you can buy in the "Bach 4 You" shops at Zazzle, Redbubble and Spreadshirt are still very clear in number. But that will already change in summer 2022. And by the end of 2022 there will certainly be no other place with more high-quality composer T-shirts than at  all the shops of the small publishing house in Southern Germany.

A crystal clear "No"? You would like to choose Bach T-Shirts, find Mozart T-Shirts and discover Beethoven T-Shirts ... so just browse music t-shirts. Because you are looking for a gift ... for example? Then again the abbreviation to the shops of "Bach 4 You". By the way ... you can't buy clothes, shoes, sweaters, T-Shirts directly in my shop at "Bach 4 Yau". Via Zazzle, cafepress, Spreadshirt and Co. you can! And also many, many gifts not, which there are on the portals, however, in great quality. Completely and even "Bachish" ... yes that works.

You are one click away from your decision which online shop to visit first.

Thousands of combinations: from the Bach T-shirt to the Mozart T-shirt, from the Beethoven T-shirt to the Wagner T-shirt. And if this selection just isn't enough for you ... then it's time to discovr all T-shirts related to music: one music T-shirt after the other. Designed for you and cool to order them via the portals.

At least one Bach T-Shirt as a really big picture. That is just a necessity on a page for Bach T-shirts.

The T-shirt and its history. It's really strange that T-shirts haven't always existed. Although humenas are so inventive and have always been. Today it's a piece piece casual and young piece of clothing. Young people are more likely to wear it as 80-year-olds, and in leisure time they are more likely tobe found  than in business life. Although ... it depends on. Not if your workplace is with Google or with Apple. But you will certainly encounter fewer T-shirts in banks than on a construction site.

Of course, it starts at baby age. And today the smallest fellow human beings wear T-shirts in boundless variety. The creativity is infinite. And that goes for the choice of designs, but also for the millions of designs of their own to order as clothing.

And what does that have to do with the history of the T-shirt? Actually ... nothing at all. If you're looking, you'll find it on the Internet. Always. Every day, every minute and mobile today everywhere. Except with a bad Internet connection. Then just not.  There are some theories about the creation of the T-shirt. It is not as clear as with the invention of the car, the discovery of flying. Some are exciting, others credible and still others simply funny. When at all, a T-shirt is a T-shirt.

So ... the T-shirt. It is an outer garment. No T-shirt is a pair of trousers or a hat. And a T-shirt always has short sleeves. But already there you can argue. But a T-shirt with long sleeves hardly looks like a T-shirt anymore. And that ... is what distinguishes a T-shirt. And it doesn't have a turtleneck, but rather a round neckline or a V-neck. And does it have to be made of cotton? Not necessarily. But most T-shirts do that today.

In ancient civilizations, people are said to have worn garments 2000 years ago that were very similar to today's T-shirts. Egyptian chariot drivers wear such T-shirts. It was found on papyrus paintings and on pictures in the area of the ancient pyramids in Egypt. But shortly after this first heyday of the T-shirt it disappeared again. And that under the hip clothes in many centuries: farmers, aristocrats, actually all wore it under the coarser top wash.

T-shirts in our time probably first developed in the military and on the high seas. In both areas, T-shirts replaced the then customary woollen underwear, which itched and made you sweat quickly. Already in the First World War this change took place.

A technological leap and thus also a cornerstone in the development of the modern T-shirt was the invention of the knitting machine, 1860 to 1864, which made it possible to produce T-shirts in bulk at low cost: Seamless shirts. Did you know that this invention ultimately replaced the one-piece underwear worn by men and women?

A hearty story is that of the tea shirt, which is written differently but sounds exactly the same. Because butlers in the English nobility constantly had tea stains on their shirts, they were allowed to wear these T-shirts without sleeves. At least ... it's a cute story.

After the Second World War (... it's the World War II, the WW II in America) the T-shirt celebrates its triumphal march today. American soldiers brought it - as well as chewing gum and nylon stockings - with them from the New World to their old homeland. It had to be white. And so it could be used many times over: as an undershirt, as a flag and as a towel. But the T-shirt was not yet socially acceptable as a piece of clothing.

Even in 1950, great film stars in their time symbolized their rebellious culture by wearing the white garment together with jeans and leather jackets: Marlon Brando and James Dean stand for this period of development. It was not until the 70s of the last century that the T-shirt finally became an accepted item of clothing in everyday life. The films the T-shirt spread with it were "The Wild One" (With Marlon Brando) and the world-famous work "Because they don't know what they're doing".

More and more the T-shirt becomes a statement. Anyone who is old enough to watch the crime series that took place in Florida remembers Don Johnson, the smart investigator who stylishly combined T-shirt and jacket. And the music - that's allowed on a portal where it's all about music - what a memory. The t-shirt also became more and more famous when the famous t-shirt with the heart, the letters "I" and "N.Y." were invented in New York and produced millions of times. New York had a bad reputation at that time and that was in the 70s already mentioned above.

The fashion designer Giorgo Armani wears a T-shirt to almost every fashion show. And we have thus arrived in the history of this little piece of clothing in today. In the 21st century and in the 3rd millennium.

Would you have known - by the way? Over 2 billion T-shirts are sold worldwide every year.

The Invention of the T-Shirt and a Cute Definition

Gutefrage.net - in Germany - is a cool platform for anyone who has questions and would like to get answers ranging from impressive to "cautiously sweet". And there the T-shirt is explained as a T-shaped, not gender-specific elastic blouse without a front seam. Sure, that's possible! Wiktionary explained it as thin clothing for the upper body with short sleeves without buttons.

Of course, T-shirts are not called T-shirts everywhere, especially not in the local everyday life, and especially not if one avoids Anglicisms and prefers to use German and Austrian words. The popular shirts in the southern German-speaking countries are called Laibchen, Leible or in Bavarian and in Austria Leiberl.

You are still here? We appreciate that. So, you see the largest button in our whole mission. And yes, you can click on it to get directly to our "Spreadshirt" Shop.