The Bach Figure:  You want to purchase one, you don't want to be entertained? Please click on the button and decide by the pics. That is ... welcome to my shop in the "Bach Bust Department".  ––

The Bach figure ... what a meeting in the picture above. Can you imagine that this photo "came into being by chance"? In summer 2019, the time had finally come when "Bach 4 You" arranged the last items on the "shelves" of the store in the Publishing House and, of course, they were photographed individually for this purpose. And when the Bach statue stood so lonely in the center of the picture and there was "still so much space" to the right and left, one Bach figure after the other joined the group. Until the photographer – my husband Peter – finally really collected all Bach figures from the whole house. And here ... they all are now. In the meantime – two years later – there is another small Bach figure: It is the tiny Bach etcher, but it also looks like a Bach bust. And in the same size there are the two "colleagues of Bach": Mozart and Beethoven. We then photographed all three separately. Here is the result:  ––

No, the sweets are not included with your purchase. They are only decoration to offer a size comparison for connoisseurs in Germany.   ––

The Bach Figure: Every Figure Has Its Story (... For Us)

It's not just ".... what can we sell, what is Bach to make money?" No, we don't have different philosophies when it comes to Johann Sebastian Bach, my husband Peter and me. It always has to be first class, whether we are reporting on it or whether we are offering you to buy a Bach item. And that goes for the Bach figure, too. Bottom line: From the discovery of the first Bach bust, it took us about five years to learn that there is a small Bach figurine that is handmade in the Erzgebirge (... the Ore Mountains), in Eastern Germany. And anyway: all sales finance only a part of our expenses for the "Bach-Mission" and the "Classic for Children-Mission".   ––

Did you know that there are tons of different Bach busts "out there"? Different sizes, different prices, from impressive facial expressions to ugly and kitschy. We never would have thought that, because at first we were happy to have found some different sized, matching, great Bach busts at all. Today we know better and want to tell you about it. After we found the most impressive works of art in the desired sizes, it was all about photography.... especially if you are a professional photographer .... like my husband Peter. And Peter loves to "play around" with light. However, since we did not know in advance which photo would better suit which environment, Peter photographed all the Bach busts and all the Bach figures once neutrally, that is, with a white and light gray background, and a second time in the middle of our living room towards the open kitchen area.   ––

Please learn more, how you could support our Bach Mission, even if you buy no music gift at all. However, in the shops above there are tens of thousands of music gifts. And with one click, you will also get an answer to the question. Have fun. By the way: It is also possible to click here to get there.   ––

Honor, to Whom Honor Belongs: The Bach Tin Figure

Peter Bach, Sr. was an enthusiastic collector of tin figures. And he was annoyed when someone called his tin figures "tin soldiers", because he had those only to a very small extent. And he was also not thrilled when people called these, his tin figures, "lead figures". The worst thing for him, however, was the combination of the two terms: in fact, they were definitely not "lead soldiers". "The History of Beer" and "The History of the Fire Brigade" ... that was "his thing" and for this he not only collected dozens of scenes – each consisting of several individual tin figures – but he also had dozens of so-called dioramas built. Dioramas are open-fronted and open-topped boxes in which houses, courtyards, landscape and more serve as additions to these tin figures. Boxes from the size of a cigar box to a meter wide.  ––

Of course, our hobbies "crossed" when we reported to our parents on the subject of the" Bach figure". And better research options could not be obtained on this subject than those of my father-in-law. A fully plastic one, also 3D, was quickly found. It is the only one of its kind and – how good – it was infinitely cool. Everything fit. And now I offer it in the store as a blank figure – so collectors call the unpainted – and as a painted Bach tin figure.  ––

The flat and much smaller as well as lighter Bach tin figure made us much, much more work: We did find two ready-made ones, but neither of them appealed to us at all. We liked them so little that we simply did not want to offer any of them in my Bach store. And because ( ! ) this annoyed us, and we had with our senior a real capacity in the "tin figure business" in the team, we thought of a motive ourselves and searched for an engraver. He first painted this future tin figure suitably, then he designed the raw piece and finally presented it to us. But ... to our shock ... the little cherub, which you can see in gray on the right side of Bach in the picture below, had disappeared. And already it was no longer the ( ! ) Bach monument, which stands in Eisenach next to the Bach House and the Bach Museum (... third picture on that page). Almost unbelievable, by the way: The little cherub holding the open book for Johann Sebastian Bach actually makes as much work as the complete rest of the tin figure.   ––

One flat Bach tin figure is a cool decoration ... but two – one of them unpainted – "tell a story". Can you see the little cherub holding the book?   ––

A so-called "full 3D" Bach tin figure. There are less than one percent 3D tin figures around. Most of them are flat tin figures.  ––

The Bach Statue Is Also the Bach Monument

For a long, long time we were looking for the next Bach figure, below. And for about five years, we were also unsuccessful in this. We really wanted to offer at least one in my Bach Store. We googled and googled and found two disappointing results: The first find was sold out forever. The second find, however, was a success. At least, that's what we thought. After we bought one and decided that this ( ! ) Bach statue was brilliant, however, the vendor informed us that this was the only one left as well and the company he was working with was bankrupt. We were so close, and yet it was a big disappointment. But ... a team – Peter and I – that spent a whole nine hours googling to find relatives with the keywords "Bach + USA" and thus finally even two ( ! ) Bach genealogy lines in America, does not give up so easily. And so we actually succeeded in finding another manufacturer abroad ... in Spain. We were happy. And we still are.   ––

This Bach bust, better the Bach statue, is photographed in three variations, from which this one is the best to show its size true to scale.   ––

Cool? Yes, definitely cool: Did you know that back then, when Bach was also a famous choir leader and orchestra boss, conductors didn't have a baton, but conducted with rolled note sheets?  ––

Every once in a while the Universe provides a little surprise, when you are looking for something absolutely different. And with that find, we can offer you that cool 3D Bach bust in a wooden frame including passe-partout.  ––

Yesss, with this lighting the whole depth becomes visible (... photographers talk). You can buy this cool portrait in my flea market.  ––

In fact, we were about to "create" such a small Bach figure ourselves with a 3D printer. But – just in time – we found him above. The little Bach, or the "Little Bach Figure" as it is called today in my Publishing House.  ––

Our Whole Pride: Bach From the Ore Mountains (Erzgebirge) in Germany

What, please, is that? It is a so-called "Drehkastl" (... a little turning box). And it's handmade. It comes from the Erzgebirge (... Ore Mountains in Germany). That's why every single "piece" is unique. No assembly line, no factory. This Bach is tiny, the idea is cool, and all this is perfect as a gift for a friend or family member who loves classical music and the composers of it.   ––

Tadaa, One More Surprise From the Ore Mountains in Germany 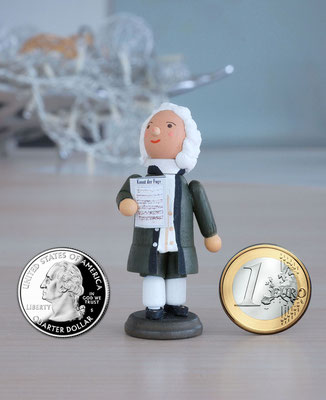 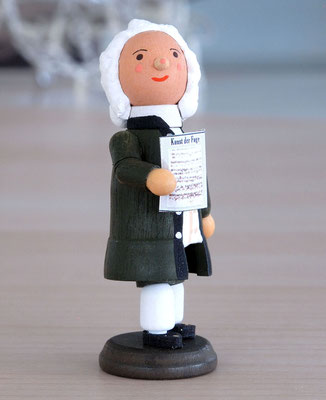 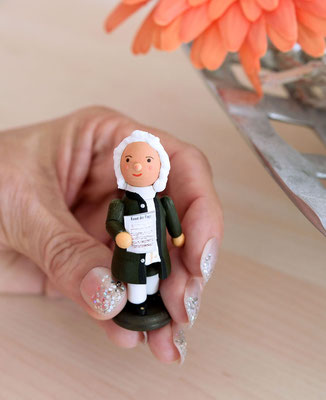 We believe it's the tiniest Johann Sebastian Bach on the planet and in the universe. However, we are not sure. Of course. Important: This little guy is also handmade and for that reason unique. He started his way to you in the Ore Mountains in Germany.  ––

Do You Have Edges in Your Home? Cool, Then We Have a Johann Sebastian Bach Edge Sitter for You

The small Bach figure "Edge Sitter": This small, cute Bach fits on many edges and of course you can also decorate it if you live by the sea and not in the vineyards in Southern Germany.

For Wine Bottles or Bottles With Other Cool Content: The Johann Sebastian Bach Bottle Stopper 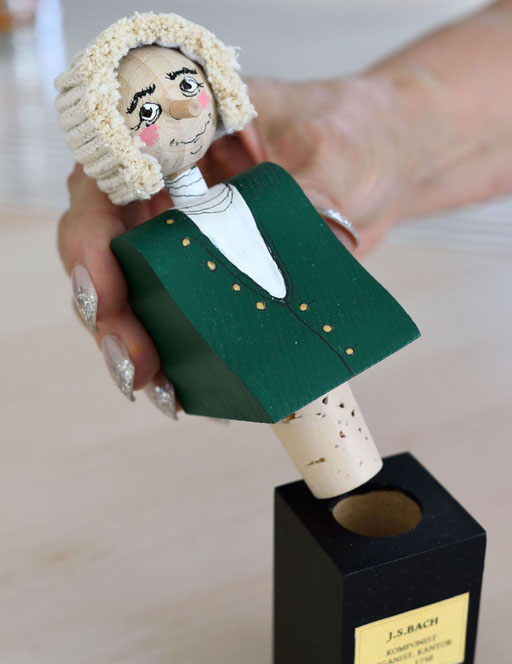 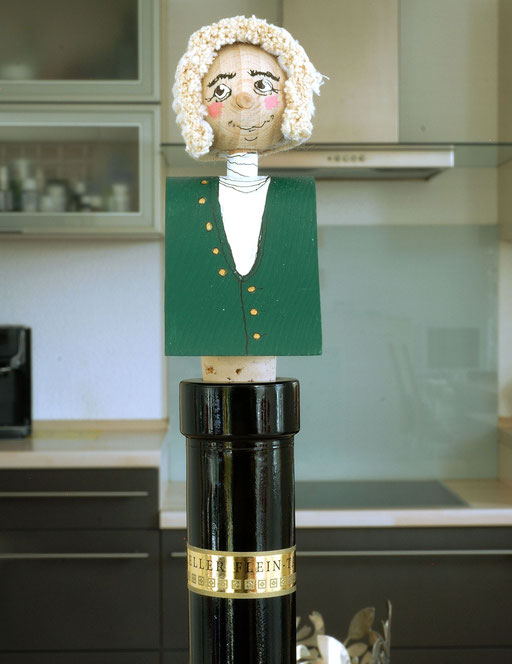 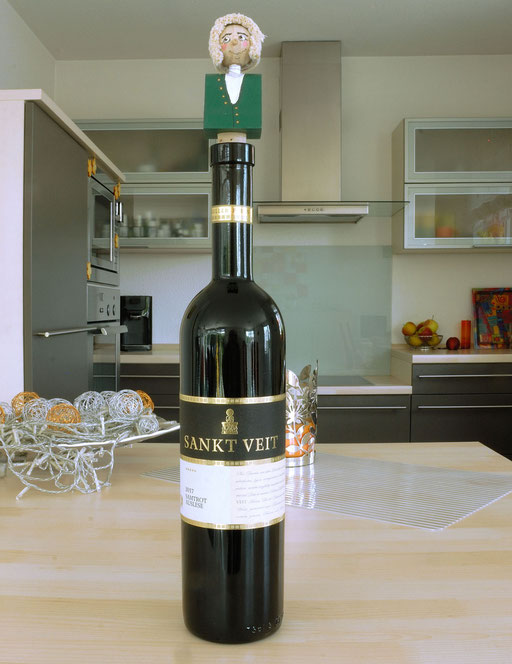 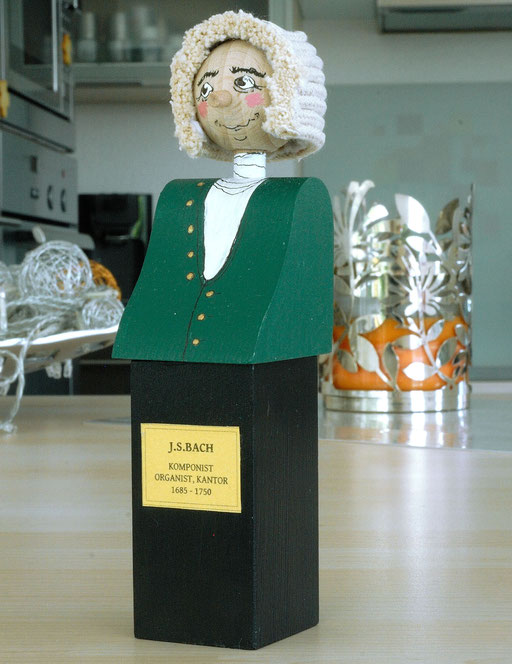 Cool, you discovered our secret: This little handmade guy is created by the same artist as the Bach edge sitter above.  ––

A final small reminder, promise. There are so many cool music gifts, we believe it's millions … learn more with a click here.  ––

A “Group Photo” as a Closure: Johann Sebastian Bach Made of Noble Gypsum* ... In Five Different Sizes ... Always With an Impressive Facial Expression

Here they are again – all five – "united" in one picture: the five Bach busts in my Publishing House. What is true for each of them? Please look at the facial expression of Bach. It is crucial for our selection. It is not about any bust of Bach ... not ... in my ( ! ) Publishing House. * ... and correct, the smallest bust of Bach on the right side of the picture is not made of gypsum at all ... but it looks like this. It is ... in fact ... an eraser.   ––